Wendy Parker, CityCare’s Records Management Officer, answered some long-anticipated questions about her therapy pooch – Buttons – who is available for visits to CityCare staff.

Tell me about Buttons
Buttons is a 5-year old male Cockapoo (he will be six on 26th December - a Boxing Day puppy).

He loves belly rubs and tickles behind his ears, chasing his squeaky ball, chasing squirrels in the park and holidays away in our caravan.

Why is he a particularly good candidate for the job of a therapy dog?
He is a registered therapy dog with Therapy Dogs Nationwide (TDN) and has been part of the TDN team for almost 4 years.

We have attended Cruft’s, though not as a contestant but to help on the TDN stall (it’s the only way Buttons will ever get there!).

All dogs have to be assessed to be a therapy dog, so there are standards that Buttons meets such as no jumping up, no snatching food, no constant barking, not being fazed by loud bangs or any different kinds of noise. Sometimes it takes him a few visits to get comfortable.

What inspired you to do this?
When I did retire-return with CityCare, my hours were reduced to only 16hrs per week so I wanted to do something with Buttons. It had become noticeable to me when, as a family, we went to car boot sales or summer fairs that Buttons would make a beeline to those in wheelchairs or children in prams and just sit next to them.

While visiting Cruft’s (without Buttons of course) I found the Therapy Dogs Nationwide stand and had a chat with a few members and the founders of the organisation. Only a year later after Buttons had passed all the requirements to be a therapy dog, we were both volunteering on the stand.

What is it about animals that you think helps to soothe people?
Both my Mum and Dad are in a Care Home (mum has dementia) and before lockdown, we regularly went there on visits. We then took Buttons to visit them and the other residents. It was so nice to see how a dementia resident would react to Buttons. They would talk to him and stroke him. The smiles it put on their faces was priceless.

Who else has Buttons helped?
We have also spent time with duty police officers at the courthouse and the control room to support their Mindfulness Campaign. The staff there reported that during their 10 minutes with Buttons, they weren’t thinking of anything else apart from tummy rubs and ear tickles. 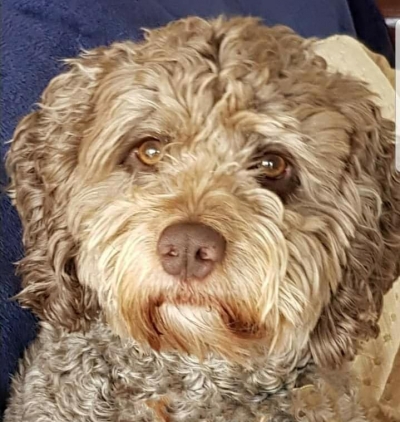